Public Talk: Why Buddhism & the Modern World Need Each Other 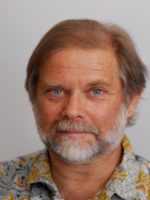 This public talk at 18:45 for 19:00 is the first Cape Town event offered by David Loy during his South African retreat tour. This public talk will be followed by a non-residential weekend retreat, details of which can be found here.

David is an esteemed American Buddhist author, philosopher, activist, and teacher. He trained in the Sanbo Zen tradition of Japanese Buddhism and a professor of Buddhist Studies. His articles appear regularly in journals such as Tricycle and Buddhadharma, and his latest book is A New Buddhist Path: Enlightenment, Evolution and Ethics in the Modern World. David’s other books include, Money, Sex, War, Karma and The World is Made of Stories. He offers lectures, workshops, and retreats internationally, focusing primarily on the encounter between Buddhism and modernity. He is especially concerned about social and ecological issues. David has taught before in South Africa, at UCT, and is looking forward to returning with his wife Linda.

Please listen to a short interview here with David where he talks about the interface of inner transformation through spiritual practice and a world in crisis.

For those of you who would like to read his work in advance, some of David's books are available online at Loot.co.za (click title to go to link):
A New Buddhist Path: Enlightenment, Evolution, and Ethics in the Modern World
Money, Sex, War, Karma
The World is Made of Stories

For more information regarding the whole weekend, please see here.
Click to RSVP